The escalation of the US boycott of Huawei in the trade war with China gains support from two large Japanese companies. Both Toshiba and Panasonic announced the end of the technology supply for the Chinese giant.

The news that Google will block Android in the handsets of Huawei, last Sunday (19). Caused a cascade effect on the Chinese giant’s business. Throughout the week, other companies, including Intel, Qualcomm and ARM. Have announced that they will no longer provide technology to the company. Now Toshiba and Panasonic have confirmed the end of the supply of resources. What’s more, some carriers will also stop offering Huawei products. 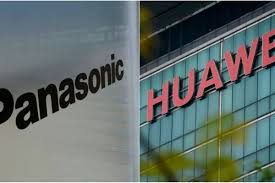 Panasonic is currently reviewing whether any of its products violate the restrictions imposed by Trump. “Panasonic announced in an internal notice that it should suspend transactions with Huawei. And its 68 affiliates that were banned by the US government,”. The company said in a statement to the BBC. “We will continue to strictly comply with the laws and regulations of the countries and regions in which we conduct business. ”

Toshiba also investigates whether it used parts or technologies originating in the United States in its products sold to the Chinese, which would violate the American sanction. Among the products are hard disk drives. Semiconductors and high-speed data processing system LSI – there is still the possibility of returning these items after verification to see if there has been a violation of the sanction imposed by the Yankees.

In addition to companies, mobile operators have started a boycott of Huawei. In the UK, Vodafone has canceled the sale of Mate 20X 5G. The first Huawei model to support fifth generation networks.

“We have halted the pre-sale of Huawei Mate 20X (5G) in the UK. This is a temporary measure as long as there is uncertainty about Huawei’s 5G devices,” he said.

Another UK operator, EE, said it has put the sale of Huawei handsets on hold until more information is available on how Europe will deal with US rules. However, EE has confirmed that it has begun to remove Huawei hardware on the carrier’s 4G networks. And that all of this infrastructure must be replaced by 2022.

Samsung patent folding design quite different from the Galaxy Foldgalaxy

Sony Xperia with 6 rear cameras may be on the way...